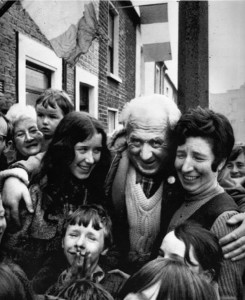 The hundreds of people who attended Rebecca McGlade’s funeral last Sunday was testimony to the love and respect she had built up during her life.

Rebecca was a Republican in the truest sense of the word and she was fiercely proud of her beliefs. Her republicanism was that of Wolfe Tone and she spent her life arguing, campaigning and working whatever way she could for the unity of Catholic, Protestant and dissenter. Rebecca hated bigotry and sectarianism and in order to rid Northern Ireland of this evil she devoted much of her life to the civil rights movement. She was a prominent figure on all the marches and for many years was a member of the Executive of NICRA.

Rebecca and her husband Big Frank worked tirelessly on behalf of their class. They carried the socialist message that working class strength lay in working class unity to the streets of Ardoyne and North Belfast. In the early seventies as sectarianism, communal strife, and the activities of bigots gathered momentum, they became more determined to get the socialist message across. They held positively and loudly to non-sectarian principles and convictions when lesser people would have chosen silence.

The only fear they knew was the fear of failing and this they did not do. That there is a continued voice of opposition to narrow mindedness and bigotry in this city of Belfast and that the voice is daily growing louder is a tribute to the people like Frank and Rebecca. People who had the vision to see the evil that was developing in our midst and the courage to stand against it.

To her friends and comrades Rebecca was gentle and quiet spoken, yet fiercely determined in her views. She did not require glasnost to express her opinions. Her commonsense and ability to relate politics to the lives of people enriched many a political debate.

Rebecca was also a deeply spiritual woman. She loved music and shared with Frank an appreciation of the Irish language and its literature. Her spirituality was an essential part of her humanity which she shared with us all.

Goodbye Rebecca. We will miss you but are enriched by having known you.