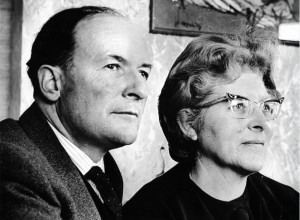 Dr. Conn and Mrs. Patricia McCluskey of Dungannon, Co. Tyrone, were founders of the Campaign for Social Justice in N. Ireland. After extensive lobbying, in Tyrone and other counties, and despite several disappointments it was launched at a press conference in the Wellington Park Hotel, Belfast on 14 January 1964. It undoubtedly was the fore-runner of the N. Ireland Civil Rights Association. Nicra was established. three years later, in January 1967. Mrs. McCluskey (nee McShane), prior to the establishment of CSJ was one of sixty-seven people, mainly women, who founded the Homeless Citizens’ League. After unsuccessful representations to the Urban Council their first marches in Dungannon took place in June 1963. The League was then led by a youthful Mrs. Angela McCrystal.

The League and Campaign’s activities are recorded in Up Off Their Knees. Written by Conn McCluskey, it was published in 1989.