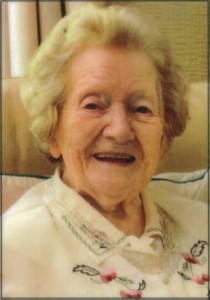 Mrs. O’Doherty died peacefully at Altnagelvin Hospital, on June 16th, after a short illness, comforted by all her children, and son-in-law, Prof. Sinclair King. The widow of Harry O’Doherty (1899-1989), decorated for his role in ‘A Company’, of the Derry Brigade, Irish Volunteers, Mrs O’Doherty is believed to have been the last of a generation linking Derry to the War for Independence (1916-23).

In the 1960s she and family members worked closely with the Campaign for Social Justice in N. Ireland, established by Dr. Conn McCloskey and his wife Patricia of Dungannon. It was actively supported at Westminster by several MPs including Stanley Orme, Paul Rose and Gerry Fitt. This group was the forerunner of the Civil Rights Association. One of Mary’s younger sons, Fionnbarra, was a co-founder of NICRA when it was established in Belfast in early 1967.

Draped in the national flag, her coffin had been carried from her former home in Crawford Square to the doors of St. Eugene’s Cathedral by her nine surviving sons and daughters, extended family, neighbours, men and women from local community groups and former republican prisoners. Among four daughters carrying her remains was Mrs. Mary Kathleen O’Doherty- King, who for several years has been an independent senator in the Trinidad and Tobago parliament.

Mrs O’Doherty’s casket was carried into the Cathedral by her sons to the music of the Mountains of Pomeroy and during her last Mass a number of Gaelic laments were played and sung.

Her Requiem Mass was celebrated on Monday morning, June 18, by Fr. Gerard Mongan who said Mrs. O’Doherty had made an immense contribution to the evolution of society as well as rearing her nine surviving children:

“Mary Ellen instilled in her family a great love for education for she believed passionately that education was the key to progress. And, in celebrating her long life today, we are all conscious of her family’s deeply-felt loss. First and foremost Mary was a devoted wife to Harry, who died in 1989. Both she and her husband represented local working class views and their home became a focal point for a wider community.”

In the mid-1960s, Harry and Mary attended the annual TUC Conference, held on the Isle of Man to update Labour and TU leaders on the burgeoning civil rights struggle in the North. Harry, a master in his family’s trade, trained scores of apprentices, before deciding to retire from Doherty Meats, after 65 years, at the age of 79. He was a founding member of the Butchers and Allied Workers Union, which eventually merged into the T&GWU. For many years he served on the Northern Committee of the ICTU, alongside a former Mayor of Derry, the late Nationalist Party councillor, James Hegarty.

Mary and her late husband remained in contact with many across Ireland and beyond. They particularly cherished close bonds with Tan War veterans and their families. Among their ever-welcome visitors where Dr. Nora O’Brien and her brother Roddy, the daughter and son of the 1916 leader and martyr, James Connolly. Their links to Irish American communities and the Left in Britain led to the opening of several influential doors which significantly assisted the civil rights cause, and,  in particular, its pivotal advocates.

“Like others of her generation she attended every one of the Civil Rights marches that took place between 1968 and ’72”, Fr. Mongan told the large attendance at her Requiem Mass.

She and family members were among marchers during the initial Coalisland to Dungannon demonstration, Duke Street on Oct. 5th, and later, ‘The Burntollet Ambush’.

On Bloody Sunday, firstly on William Street, and later Rossville Street, they witnessed the massacre by the First Battalion of the Paras, which included the shooting of fondly-respected Bogside neighbours, such as Johnny Johnson. Harry and Mary assisted two of those shot. They were tended to at the nearby home of an old friend, Mrs. Bridget “Ma” Sheils. Bridget’s late husband, Paddy, was a legendary republican leader in the 1920s and beyond. Mr. Johnson, who had lived only a handful of doors away from the O’Doherty home at 134 Bogside, died a few months later.

Fr. Mongan said civil rights leaders had spoken publicly of Mary being a “mother to us all and everyone involved”. Several civil rights veterans, including John Hume and Ivan Cooper, spent time with the family whilst paying their last respects. A visit by Bishop Edward Daly was particularly appreciated because of his own heroic role during the civil rights’ march on Bloody Sunday in January 1972.

A lifelong gaelgoiri, Fr. Mongan said Mrs O’Doherty helped promote Irish culture in the city and enjoyed a profound love of Gaeilge literature, song and dance. He also noted her contribution to the welfare of political prisoners, social justice and the rights of women for which she received the transatlantic Celtic Cross Society Award earlier this year. Mary’s contributions on several fronts were only fittingly recognised in the last decade of her life.  Her characteristic humility was always quite evident. When initially told others wanted to salute her work, she said, “Only important people receive special awards”.

All her family, friends and people in many walks of life give living testimony that she will always be an important person to all who were privileged to know or struggle alongside her. Appropriately, the Celtic Cross is awarded to “ordinary people of courage, faith and life of simplicity”. Among its previous recipients were Mr. Raymond Flynn, a former Mayor of Boston who was appointed US Ambassador to Vatican City, and Mrs. Sheila Kelly of Dublin, the widow of an Irish Army officer whom Mary, then aged 96, and other campaigners welcomed at her home and later to the City Hotel in 2004. This was part of an on-going crusade aimed at lobbying the Irish government to publicly exonerate her husband, Captain James J. Kelly*, who died the previous July.

In 1997, Mrs. O’Doherty, on the recommendation of several community groups  was awarded a Pensioner of the Year Award by Age Concern at a public ceremony in Derry’s Guildhall. Later, although never a member of the AOH, at another formal event, Mary was made an honorary member of the local Ladies Division in 2002. Interviewed on the occasion of her last birthday,  Mary spoke eloquently of the role of other women in spearheading community progress but lamented the fact that, unlike her, their contributions remained unrecognised during their own life-time. Mary was much appreciative of the fact that the then female Mayor of Derry, Councillor Helen Quigley, and the Junior Mayor, Emmet Doyle, bearing a floral tribute, paid an official courtesy call to her home to congratulate her on reaching her one hundredth year and on being awarded the prestigious Irish-American Celtic Cross Award

Fr. Mongan also described her as a “powerful presence” at every family gathering. “She has left us an inspiring legacy in her commitment to social justice and equality as well as her Irish identity, which she would never forget or deny. Mary rejoiced and was glad of all things Irish, including ceili dancing and music. Sitting on her Gaelic-speaking grandmother’s knee, in Balee, near Strabane, where she was reared, she’d listened to first hand accounts of starvation, evictions and mass emigration.”

For more than a decade she acted as a trustee, alongside the late Cllor. Tony Carlin, former Mayor of Derry, on the North West Great Hunger Memorials Committee, then based at the AOH Hall on Foyle Street.

Fr. Mongan led the congregation in the prayers beloved by Mrs. O’Doherty, Se do bheatha Mhuire and the Ár nAthair. Her funeral procession left the church to the strains of the Flower of Sweet Strabane, which is close to her birthplace, at Balee. Musical tributes were provided by Áodan Dorach O’Donnghaile, Riseard Mac Gabhann and Padraigh O’Mianáin who played a piece specially composed for Mrs O’Doherty’s Requiem Mass.

According to numerous messages sent to the civil rights veterans’ office, where Mrs. O’Doherty had for years worked voluntarily, Masses were offered in recent days in Trinidad, Spain, the US, Glasgow and London, and by Irish missionaries in fields across Africa, in her memory.  In a recent letter published in the ‘Journal’ the U.S-based International Executive of the O’Doherty Clan mourned Mary’s passing. They described her as the “Grand Hostess of Derry, Ireland” due to the fact that “with the loveliest of smiles she welcomed at her door thousands of Irish, Americans, Canadians and Australians over several decades.”

Mrs. O’Doherty is survived by her sons and daughters Anna, Pat Leo, Breege, Mary Kathleen, Pearse, Deirdre, Fionnbarra, Kevin and David and by her youngest sister Celine, who, with her family resides in Strabane.

Like the beauty and loveliness of passing seasons kind hearts always leave the world a better place for us.

In the eternal kingdom, may she rest in peace.

Compiled and submitted by the Oct. 5th Association – a network of 1968 civil rights veterans and supporters. E-mail: rights.civil@googlemail.com