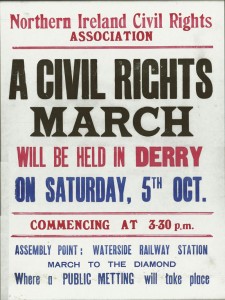 Click on the poster to see a larger version of it….

This poster was printed as part of the mobilisation for Derry’s first-ever Civil Rights demo on Oct. 5th 1968. Some years later its designer, Fionnbarra Ó Dochartaigh, pointed out that such was the haste to obtain it off the presses that it was not properly inspected, and admitted it was only after many months he discovered that the word “Meeting” had been misspelt. He revealed that the colours he choose were quite deliberate. Black, symbolic of the on-going struggles against racism in America, South Africa and elsewhere. Red and blue on a white background were incorporated in a bid to widen and deeper what few links that then existed with working-class unionist families, who also suffered poor housing conditions across the city.

Ó Dochartaigh was secretary to of the Derry Housing Action Committee [D.H.A.C], and editor of its periodic newsletter, priced one-shilling. Following the successful Coalisland to Dungannon march the D.H.A.C called on the Nicra executive to organise a demo to highlight diverse social issues, particularly the dire shortage of houses and the need for boundary extension. It played a pivotal role in raising public awareness, not least through its newsletter REALITY, by frequently disrupting Corporation meetings at the Guildhall, court appearances and two members being incarcerated, pickets, street protests and other actions which attracted widespread media attention.

Women played a prominent part in its creation and development. The most outstanding of these was the late Mrs. Bridget Bond. Both she and her husband Johnny were key activists since the D.H.A.C’s inception. Mrs. Bond later unveiled the Bloody Sunday Monument dedicated to the 13 people shot dead during the civil rights march on January 30, 1972. Also remembered is Johnny Johnson who died of his injuries, soon afterwards. 17 civilians were reported wounded by the 1st Paratroops Regiment which opened fire on the demonstration after entering the Bogside.