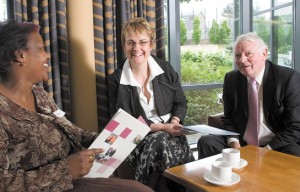 THE SDLP was always the “party of housing”, social development minister Margaret Ritchie told a conference to commemorate the 40th anniversary of the Caledon protest.

Entitled ‘Housing Rights for All’, the event at Armagh City Hotel on Saturday was addressed by the key participant in the protest, Austin Currie.

She said that while the challenges in the housing sector were different today, they still remained a priority.

“Happily we have come a long way from those times,” she said.

“We have equality of citizenship, a power-sharing government and the allocation of housing is no longer controversial.

“However, we do have some very significant challenges in housing.”

The minister said her department’s new housing agenda would be “addressing housing problems today and identifying solutions for tomorrow”.

The conference heard how the Ms Ritchie intends to address the legacy of 40 years of segregated housing by making ‘Shared Future Housing’ a central theme in all her endeavours.

“We must demonstrate what can be achieved when people choose to live together rather than apart,” she said.

“We must learn from the past if we are to enjoy the benefits of a shared equal future.”

The minister said there was still a minority of people who opposed the provision of housing for those who needed it.

“Inspired by the courage of Austin Currie back in 1968 we will confront those who would deny proper housing to others – we will build wherever there is need,” she said.

Ms Ritchie noted that her party had a strong record of campaigning on housing issues.

“Austin Currie showed the way with his courageous leadership in Caledon,” she said.

“Others like John Hume showed great vision, setting up the credit union movement, without which many thousands of ordinary people would never have got to enjoy the benefits of home ownership… the SDLP has always been, and remains, the party of housing.”

The conference was organised to mark Mr Currie’s 1968 protest against housing segregation.

The nationalist MP squatted in a house in the Co Tyrone village Caledon in protest at Dungannon council’s refusal to allocate homes to Catholics.